Drops in buckets.  This week has been full of drops.  Lack of drops and celebrating drops. Drops, whether you realize it or not, DO, impact your quality of life, good and bad.

Last Friday Steve had a lovely ablation.  I won’t go into details, but it involved the part of the body that you sit on. Yeah, and then Part 2 involved the part of the body that expels what we all refer to as #1.  Needless to say, when both #1 and #2 are compromised, life basically stops in its tracks (or there is a lot of painful moaning).  I’m grateful to say, we made it through the weekend and both organs that control #1 and #2 are functioning properly again.  Thank God. Let’s refer back to drops.  Drops are important.  Drops do impact you for the good or the bad.

My ablation had a much different recovery trajectory. (Thank God!)  In the video link, this patient received treatment from the same device, Minerva, that I received mine.  My gynecologist, Samuel Kassar, used this on me, for the first time with another gynecologist, nurses, and the Minerva representative present.(Yes, I was the guinea pig, I feel so sad for guinea pigs, why would people do experiments on guinea pigs? They’re so cute.) I was a teaching tool and was grateful to be completely anesthetized during the procedure.  When he told me there were going to be other people watching the procedure, I said, “Well, I’m glad I won’t be awake for that.”  He said, “Fair enough.”   (Can I get an amen from all the ladies in the room?) If you have heavy menstrual cycles that are teetering out of control and inhibiting your quality of life (for me this was extremely heavy days that made it so I needed to rush to the bathroom, which was a challenge when I only have a bathroom break during recess time.  I can’t just leave my class full of students alone. Duh. So I’d have to bleed out and hope I have a change of clothes or a sweater to cover myself the rest of the day.)  The anemia was the straw that broke the camel’s back.  The exhaustion of not being able to retain my iron levels, made me seek a solution.  Birth control pills and an IUD involved side effects and foreign objects in my body that I wasn’t willing to introduce.  A hysterectomy was too extreme and involved other hormonal side effects.  The D&C ablation seemed like the best option for me at this point in my life.  This particular dropping has significantly impacted me & I’m grateful the drops in the bucket will be basically nil from now on.

In the middle of drafting this post, I found out that our 13-year-old water heater could not be repaired without ongoing problems.  So, we were advised to get a new one.  What’s another $1000, when you’ve spent almost $90,000 over the past couple months?  Just a drop in the bucket, yo.  Drop in the bucket.

The thing is, I could be really angry about this whole hellish-home-investigation-solar- panel-construction chapter, and believe me, I’ve had my moments.  However, when I look at the bigger picture, the fact that I live in one of the richest and most financially stable places in the world, it’s hard to complain.  We may not have as much equity in our home as we had hoped at this point in time, but our house is going to value at over $530,000. (WHAT? Yeah, that’s SoCal.  Location. Location. Location.) Really, considering we bought our house in 1999, for $159,000, I think it’s a pretty darn good increase in value over 18 years.  Also, considering we had NO IDEA what we were doing when we bought this our first and only house, it has turned out to be a good investment.  Although we have been tormented by some stupid-ass decisions, i.e. not getting proper permits back in 2005.  (Live and learn from us people.  GET PERMITS! It will come back to bite you later.  It will. Or maybe it won’t.  Or maybe it will.)

Hopefully, we’ll look back at this time of our lives and say it was just a drop in the bucket. It feels a little like the chunks of rusted parts in the picture below.  These rusted parts separated from the inside of the water heater.  But now, we’ve got a new and improved water heater.  Hopefully, this is a foreshadowing of good to come. 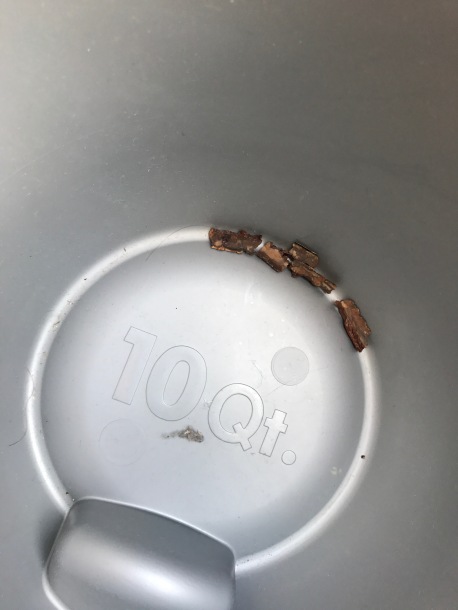 Until next Friday.  Love you loves.

I’m not supposed to lift or exercise for 2 weeks after the ablation.  This freaks me out a little because I’m a bit rigid with my routine.  I don’t think I’ll fully abide by the doc’s advice.  (SHHHH!) Really, I’ll stay away from the heavy lifting (hard considering I need to clean up my classroom, “Uh kids, want to help in my classroom?”) and walk as much as I can this week to work up to my daily quota of steps.